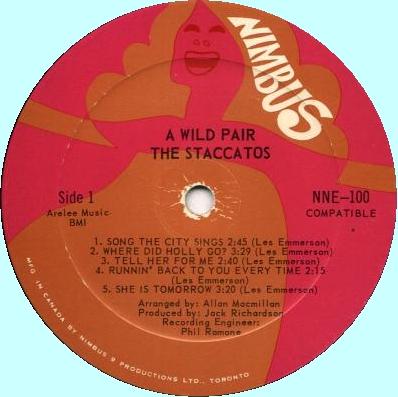 Nimbus 9 label side 1 with Allan Macmillan as musical arranger.  The Staccatos hailed from Ottawa and were Capitol artists at the time they recorded this special album for Numbus 9.  Incidentally, the Staccatos were not the first official Canadian rock group to appear on Capitol Records of Canada. That honor actually belongs to another Ottawa group called The Esquires, an instrumental/vocal group that sounded similar to Cliff Richard and the Shadows.  This fact became available on a recent re-issue of The Esquires by Capitol contained in the liner notes.